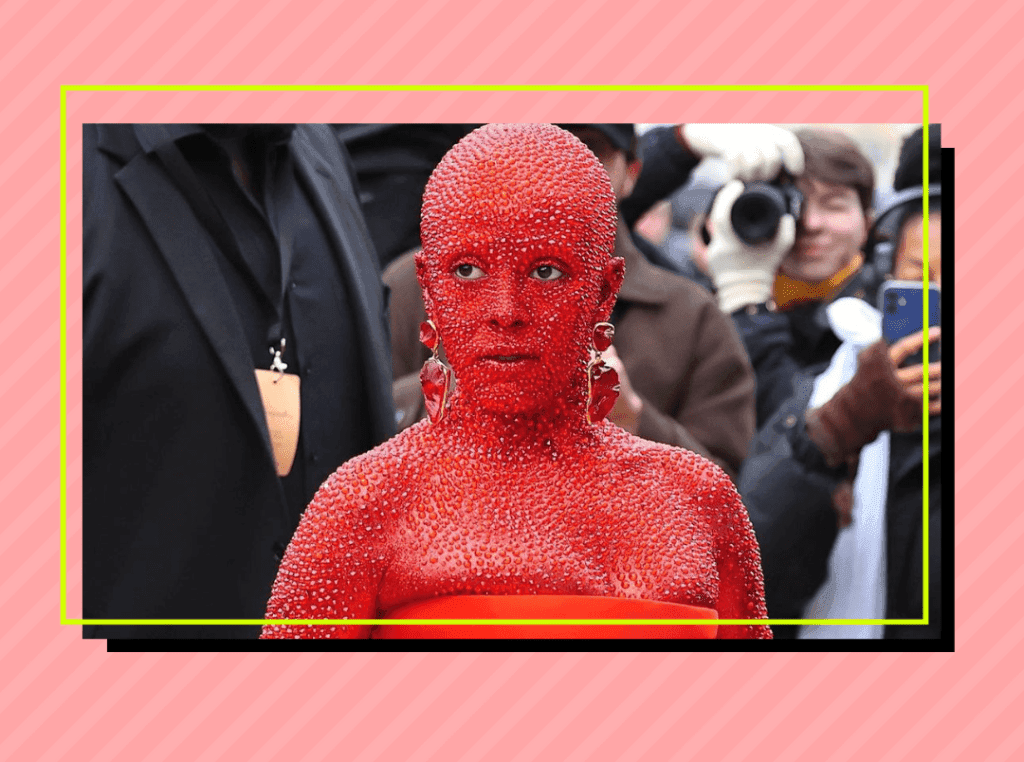 Doja Cat has once again sent meme-makers and influencers all over the world to work. And it’s not because of a song or album roll-out. Many now know that the American singer-rapper’s talents aren’t just limited to music. Her C.V. boasts a liking for off-beat beauty aesthetics, and she exceeded my expectations this time. Doja covered her body in thousands of Swarovski crystals (30,000 to be precise) last night, and the four-hour process resulted in a look that dazzled everyone. This display of creativity reminded me of all the times she waltzed down runways and carpets looking nothing like a human. Glorious, anyhow.

All Sorts Of Extra

No Makeup? No Brows.

Back in August, Doja Cat shaved the hair off her head, and eyebrows on a live on Instagram. Even though detractors questioned her mental ‘well-being’, she shook it off. For months on end, I noticed how she embellished the forehead with colourful, razor-thin arches.

Doja single-handedly transformed the role of eyebrows in beauty. She debuted the switch-up with this look — a pair of painted-on jet-black flicks, featuring hearts. Never have I seen anyone attempt to glamourise eyebrows quite like this before.

If Golden Hour Was A Person

Doja notified everyone of her (unofficial) role as the show-stopper of 2022’s Paris Fashion Week with this look. The singer’s MUA transformed the eyebrow-less singer into a human-sized award. The end result was a glistening gold-drenched statue that went down as one of the most talked-about looks from the event.

Am I Watching Avatar?

Paris Fashion Week continued to induct Doja into a world of experimentation. Her alien-themed avatar indulged meme-makers, MUAs, and influencers alike. Because, who streaks their face with blue and white paints, fills their lips in with a classic cherry-red, and adds cat-eye flicks? Only Doja. I cannot think of anyone pulling this off apart from her.

Dora Or Doja? You Decide

The one-time Doja chose to wear a wig, she played around with the ever-trending bob and micro bangs. This fusion of styles might have looked a little too much on someone else. But not on Doja. Maybe it’s her cool-girl attitude.

I’m not sure what to expect next, but it’s Doja’s unpredictability that keeps me on my toes. If I were to assume, I’d say she’s already prepping for her next event. And I know it’s going to be a new favourite of mine.